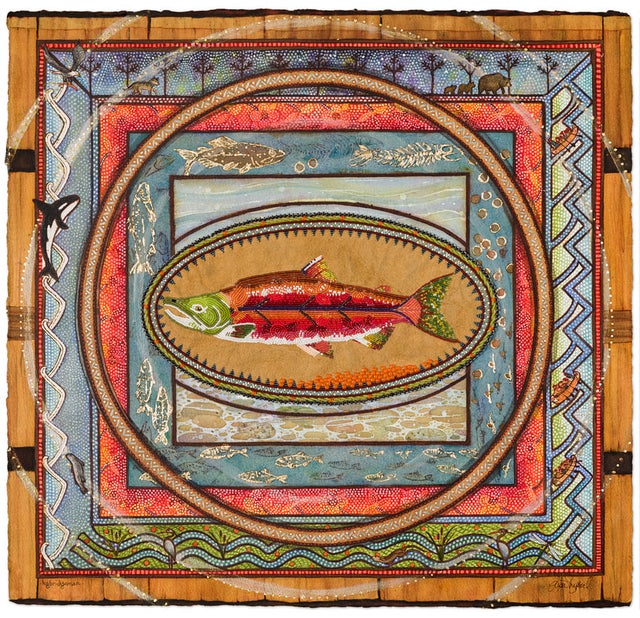 by Kristi Bridgeman and Lisa Shepherd

Salmon’s value to the early Métis of British Columbia cannot be understated. Before the turn of the century, Métis in BC relied not on buffalo, as was the case east of the Rockies, but on the water’s abundant food source. Salmon was harvested everywhere from the fertile Columbia and Fraser Rivers, to smaller streams throughout the West. It was an important trade good. Posts such as Fort Langley brought in large quantities to be processed—salted and layered in oak barrels that were made in the fort’s cooperage. The salmon was distributed far and wide along trade routes, often being the only source between survival and starvation. Indeed, explorations could be delayed by a year if the salmon hadn’t yet come in. In those days, we are told the rivers ran red with returning salmon.

In Mistamîkos, our salmon completes its life cycle with a final act of spawning in a cool clear stream. Moving outward, we see the life cycle from eyed eggs and alevin in the eastern doorway, to spawning adults in the north. The outer border shows just a few of the creatures dependant on salmon; from human beings, to the great blue heron, otters, orcas, eagle, wolf, bear and even—as the salmon passes back into the earth—the forests. To read about this artist collaboration, see this web page.

*PRINTS: The large print image itself is 12"x12" and the paper extends to 13"x13". If matted, off-white non-yellowing mat is added to the print, perfect for framing. Includes design story and artist bio. Printed locally, 100% recycled FSC-certified paper.